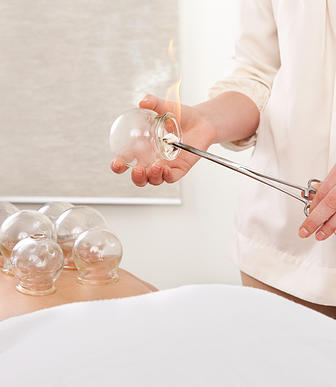 Cupping has been a sought after means of pain relief for centuries.  It involves heating the air inside a cup and placing the inverted cup on some part of the body.  A vacuum is created, which anchors the cup to the skin and pulls the skin upward.  The suction created by the cups penetrates deeply, releasing toxins and refreshing stagnant areas.  Any sore or stagnant tissue that is pulled upward into the jar is suddenly oxygenated and replenished.

In Traditional Chinese Medicine (TCM) cupping is used to pull out cold, wind, and dampness from the body.  Cupping treatments benefit people with a wide range of pain and respiratory conditions.  Edema is also effectively treated with this therapy.  Cupping is usually used in conjunction with other TCM treatments in order to enhance the treatment.

There is a large number of conditions that TCM practitioners treat with the use of Cupping. It is used in treating:

During a treatment, oxygen is removed from the inside of the cups through the use of fire.  A small flammable substance like a cotton ball is soaked in alcohol and lit.  The substance is then placed inside the cup and is burned until it extinguishes, thus removing all oxygen from the cup.  Then the cup is inverted and placed on the skin.  The cups can be moved to the desired positions and left there for about ten minutes.  After the treatment small circular bruises may remain on the skin especially over areas where blockages existed.  These bruises are painless and usually disappear after a few days, but for people suffering with serious health conditions, the immediate alleviation of symptoms well out weighs the temporary blemishes.

$55 as its own treatment

* These statements have not been evaluated by the FDA.